Friday night, 8pm and a fierce, growling hunger had been heard from deep within that stomach of mine. I promptly grabbed DF after a long working week and dragged him towards my new favourite street in Sydney (some may agree that I’m a little late to the party), Victoria St in Darlinghurst.

Restaurant of the night that fine evening was Una’s, which I had thought looked vaguely Irish, but was in fact very much German.

We kicked off with a couple of steins of Germany’s finance unpronounceable lagers / wheat beers (both $9). Mine sounded like it was called something like Schofferhoffer. But in my head that does sound ridiculous, so it could have just been the name I blurted at the waitress after reading the names of various beers on offering, scrawled upon a large blackboard in the delightfully family-feeling restaurant. I say family restaurant – not in the awful Sizzler sort of way (no offence, Sizzler, I still love your cheesy bread) – rather, in the good old fulfilling, nourishing home-cookin’ sort of way. The good sort of family restaurant. Anyway, my beer was delicious and wheaty.

We ordered our meals – DF went with one of the specials of the day: crumbed barramundi with rosti and salad ($22.50) and I went with the safe, the tried, the trusted (and slightly racist sounding) gypsy schnitzel with rosti (so….much….rosti) ($20.50). Soon after, without much explanation, we were sort of bizarrely brought an appetiser, essentially consisting of cabbage and mayo. I have to admit that coleslaw is probably way down on my list of priorities of things that I want to continue eating in life so I didn’t end up eating much of it.

Our mains came out surprisingly quickly considering that the restaurant was pretty jam-packed by this point. 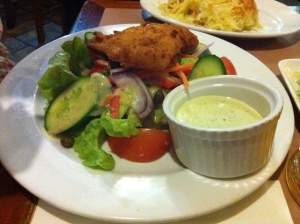 DF’s barramundi, he said, was cooked nicely and the crumbs golden and crisp. The picture is a little deceiving – the fish wasn’t thaaaat small. The mound of salad was just scarily huge. DF said the (incredibly large portion of) tartare sauce that accompanied was “tart and creamy”. I haven’t actually had too much experience with rosti, so I can’t claim to know what the perfect texture and taste should be. In my head, I have this image that it should be like a slightly more fulfilling, potato-y hash brown that’s not quite so oily. Unfortunately, this rosti was not quite that. It was almost as if a potato had been passed through a long, large-hole grater and then squeezed together and fried for less than a minute. So by the time it reached us, it was sort of steamy and a little bit browned, but overall a little tasteless and lacking in any sort of crispness.

My schnitzel was huuuuuuuuge. I’m talking big. Two gigantic pieces of veal, thin – as any good schnitzel should be – crumbed and fried, with an equally anorexia-defying helping of the abovementioned rosti. The sauce had been described as spicy, but it was more of the marina sauce that appears to adorn every single dish in the USA. Tasty, yes; spicy, not really. The schnitzel was moist and flavoursome. I made a concerted effort to eat some of the crunchy bits before they inevitably ended up soggy from the heat / steam off the other piece of veal. In parts, the veal was a tiny bit grissly, but for the most part it really was quite delicious and comforting. I did have the most unbelievable food-jealousy for the meal that a lady sitting at the table next to us had ordered – the pork knuckle with sauerkraut and rosti smelled SO delicious. It looked juicy and – again – gigantic – and looked tender and perfectly cooked.

With food babies ever present, we skipped dessert (well, I say skipped loosely. We skipped dessert at Una’s itself and hopped right on over to Messina across the road…). But I have to say that I actually really loved the homely, no frills cooking and atmosphere at Una’s. It’s not fancy, it’s not fine but it is hearty, delicious and bloody enormous.

I choo-choo choose you