On a cold drizzly night, a catchup with old friends on the cards, the promise of a warm, lively night at the Duck Inn pub in Chippendale seemed just the ticket.

The pub was packed as we arrived, and our only seating option was in the beer garden outside. A great spot in concept, but not so great as it started drizzling, then bucketing down, after we had taken a big gulp of our first ciders. Using great agility, we hopped, skipped and jumped over to an umbrella-protected table and there proceeded to continue our leisurely chatter until the rain really started bucketing. Luckily a few people had left in the main part of the bar, so we quickly nabbed a table and were thankful for an actual roof.

We started off with a cider and all commented on the slight rancidity involved with sipping a glass of Magners. We all agreed that the taste improves significantly, with rancidity decreasing in inverse proportion to the number of schooners consumed. $7 each.

Dinner is basically pub grub, with the essence of a effort to make things just a little bit fancier than the normal hum drum grub. In our group, one ordered the Classic Oz Beef Burger ($18), one Pork & Fennel Sausages ($17) and two steak sandwiches ($19).

The burger was described as “not the best burger I’ve ever tasted” and it was noted that the bottom half of the bun was cut from a loaf, and was not an individual roll. We reflected on the potentially critical error of this, depending on the sauciness/ juiciness of the burger and the necessity of the crust from a roll to prevent disintegration. We were advised by our resident New Zealander to go to Queenstown’s Fergberger…or the significantly closer Burger Fuel…for a more tasty morsel. 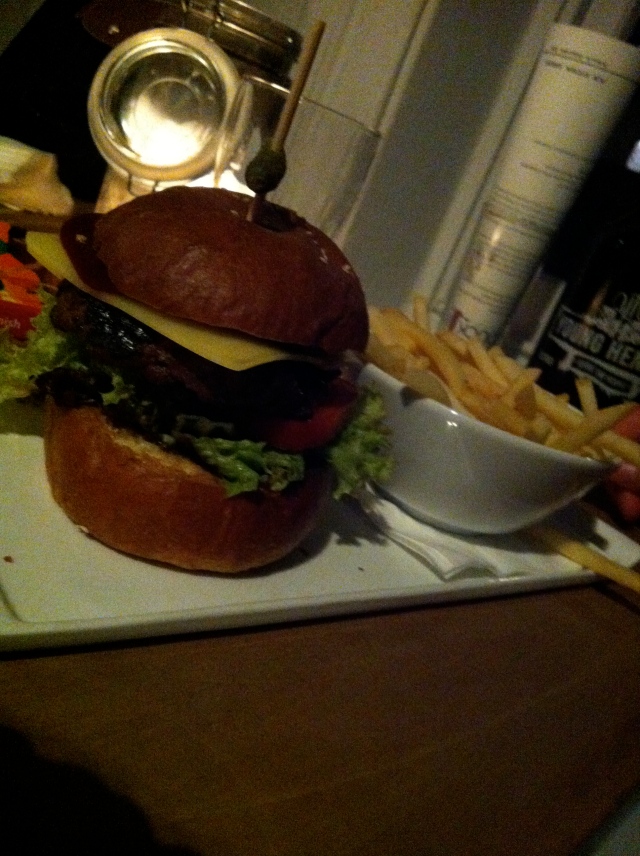 The pork and fennel sausages were described as “amazing”, although the accompanying potato mash was “floury” and “the worst I’ve ever had”.

The steak sandwich, I felt, was slightly on the small size, although the steak was fairly thick. I had a super grissly bit in one corner of mine, which made eating with hands – as any good steak sandwich should be – awkward and with the distinct possibility of ending up with a sizeable bit of steak hanging from my mouth, out in the open. The spiced tomato chutney was described as “pretty tasty”, although I was less optimistic about it. Fairly average and I was not a fan of raw red onion slices – cooked and caramelised is the way to go here.

The chips were a good-sized serve, crisp and generously salted. I’m personally less a fan of the french fry style and more a fan of the steak-cut chips style, but that is no criticism of the Duck Inn.

I had pretty significant food envy of the table next door, which had ordered a couple of the Vale Ale battered fish and chips ($18) and the Twice Cooked Pork Belly (about $24, I think)

Another cider (Batlow, $8.50) later, we headed off into the cold, walking past those young things out for a night on King St, and retreated into the warm, warm safety of our apartments.

Food? 6/10. I wanted to like the food so, so much. And I admit my said food envy…but for us, it was average at best! Safe pub grub though, with a few nice hearty touches
Drinks? 8/10 Decent. A few ciders on tap (the boring Magners, the Batlow and then one poured out of an ale pump) and few craft beers
Atmosphere? 9/10 – a cool neighbourhood pub. Lively, packed, a cool beer garden out the back, a dining hall to one side, friendly bar tenders, rushed but nice service. I’d definitely go back for a Sunday afternoon session.

I choo-choo choose you